The age of technology and the Internet is developing steadily in Northfield. While some Internet users are choosing to explore paths of faraway adventure, the people at Northfield Citizens Online (NCO) are trying to entice residents to visit and participate in their own community from the comfort of their living room, den or office.

Current NCO Chair Griff Wigley describes the Web Cafe as “a place for community-oriented conversation … to strengthen the local community. People I know and live near are hanging out there,” he said. If that’s so, the number of people Wigley is meeting in his own living room is steadily growing. At the same time, more Northfielders are learning and talking about Northfield, both in and out of cyberspace. 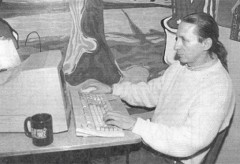 NCO Chair Griff Wigley accesses Northfield Citizens Online on the public access terminal at Goodbye Blue Monday. Anyone can access the web for free on the terminal at the coffeehouse or at the Northfield Public Library. (Photo by Rachel Vogt.)

The forums
The main part of NCO is the Web Cafe, a collection of discussion “tables” on a spectrum of Northfield area conversation topics ranging from skateboarders and the high school to Northfield media and government. In September 1996, the first web forum titled “The state of the city” was initiated by the group, after the recent hire of City Administrator Scott Neal. The attraction of the forum, Wigley said, is that there is an ending point to it. This allows government officials and others who may not be able to make large time commitments to a forum to attend.

A “livable communities” forum in the spring of 1997, however, was the first step to creating the community-wide forums that are running today. According to Wigley, the livable communities forum included the Northfield League of Women Voters, who hosted their own public discussion on the topic during the same weeks as the web-based forum. The more teamwork of community organizations the forums could utilize, the more impact they would have, Wigley said.

In August, Paul Hager of Northfield public access television, the Northfield News, Neal, the Healthy Community Initiative, and the League, of Women Voters all teamed up for the first full-community forum on parks.

This was the goal of the forums: to get people talking about community issues across the spectrum — on the web, face-to-face and in the media. According to Wigley, the parks forum was followed on the web by nearly 40 people, with about 12 or 13 participating with comments.

The most recent of the forums, on intentional families, had the best turn-out so far. Wigley said about 50 people were watching and about half of those posted comments. In order not to scare any potential silent watchers away, Wigley said, “You can lurk, I don’t know you’re lurking.” He is only able to track the number of people who have accessed the forums. Names are only added if one posts a comment.

Building a history
NCO was born in a salon in 1994 when several residents posed the question: what is the Internet going to do to the health of the community? Will it have the same effect as television? they asked.

In response to their own questions, the group decided to set up a “free-net” and bulletin board, focusing on the Northfield community, that users could dial into using a modem.

In 1995, the organization made the decision to become independent. The group formerly had ties with the Community Action Center (CAC), which served as the group’s fiscal agent until then. “They were very instrumental in nurturing us,” Wigley said of the CAC. That same year, they approached the city for funds and received them. The year of 1995 was also a turning point for the group in that MicroAssist came to town. The company allowed NCO to host the site there.

“That solved a major financial problem,” Wigley said. With those foundations beneath them, NCO was able to enter the World Wide Web and bring the community of Northfield with them.

Since then they have done much revamping and updating. Over the course of two years, recent board member Steve Hatle performed a huge task for the group by getting NCO’s server donated from Cray, set up and hooked up to the Internet. NCO now hosts the Northfield Web Cafe – full color and available worldwide. The organization also offers free e-mail accounts, provides server space for non-profits to host their web sites and features links to other sites, which are resources for strengthening the local community. The group has been led over the years by three board chairs: Wigley in 1997; Tracy Hartke, 1996, and Bruce Morlan, 1995.