Skip to content
Home > Environment > Europeans Blaze the “Bike Trail” for U. S.
Published May 4, 2007 by Ross Currier

Europeans Blaze the “Bike Trail” for U. S. 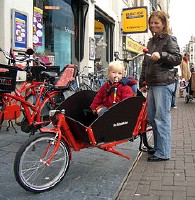 Little did I know when my Dad gave me a subscription to the Wall Street Journal for Christmas that it would become my top source for “Green” news. First there was the challenge to the conventional wisdom about ethanol, then there was Denmark’s road to energy independence, now it’s European promotion of bicycle travel.

Communities in Europe have long been big believers in bicycles. 40% of commuters get to work by bike in Amsterdam and more than 33% of commuters use bicycles in Copenhagen. Now other communities are striving to reduce gasoline consumption and carbon dioxide emissions by working to increase bicycle commuting. Norway plans to raise bicycle traffic from 4% to 8% of all travel and Sweden is working to move from 12% to 16%.

For many European bicycle commuters, it’s not all about green goals. Many bike riders cite burning calories or clearing heads as their motivation for leaving their cars at home.

A number of American cities are also working to increase bicycle commuting. However, there are sometimes pockets of strong opposition to creating bike lanes, narrowing driving lanes or reducing speed limits.

There’s even some movement toward increasing bicycle commuting in Northfield. At Monday night’s Council Meeting, a resolution to establish a task force on non-motorized transportation will be considered by our community’s leaders.