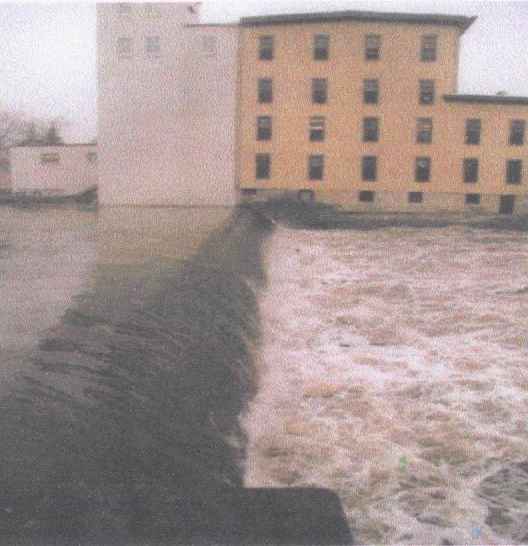 [Note from Tracy: The following was posted as a comment which was held for moderation. I thought that the story merited a post of its own. Thank you, Mr. Blodgett, for writing.]

“The shocking incident happened just at six o’clock. The boys were enjoying a boat ride above the dam and came down stream at full speed . . . Whether the steering gear was at fault or the engine was not working properly seems to be a conjecture, but the swiftly raging waters drew the boat and its living load toward the brink of the dam. The launch swung around as it neared the dam and went over stern first. (continued)

“The boat seemed to strike in an upright position, but the turbulent waters turned the boat almost instantly into the trough of the waves and the boys were pitched out between the dam and the boat.

“While there was a great crowd standing on the bridge, no one seemed to realize the danger the boys were in. It is such a frequent occurrence to have some boy go over the dam that no effort was made to assist them.”

Although the crowd was unconcerned about the plight of the two boys, Ed Rice, a local hero, knew that one of the two boys was a poor swimmer, so he tossed off his coat and ran down the riverbank, grabbed a small board as he jumped into the torrent below the struggling boys.

“Luckily there was floating down stream a good sized plank that he shoved out toward [one of the boys] who barely had enough strength to grasp it and hang on. Rice could make no headway against the current and with his burden floated down below the Second Street bridge where he caught some overhanging willow branches and swung the half drowned boy to shore where help was given both to get out of the stream.

The other boy, 18-year-old Vern Livingston, did not survive. A search party found his body the following Tuesday several miles downstream at Waterford.

The News continued: “Edward Rice, the hero of the sad incident, is deserving of the highest praise for his daring deed.”

If Ed Rice had not been so heroic, I would not be here today. The seventeen-year-old boy whose life he saved was my father, Alson Bertram Blodgett.

My favorite visual experience for most of the twenty-two years I lived in the small college town of Northfield, Minnesota was the Cannon River in spring flood pouring a thick back sheet of water over the milldam that once powered the Malt-O-Meal plant. Though only a ten-foot drop, the water’s roar was deafening as it created a brown, turbulent froth filled with a thousand fat carp fighting to climb the dam.

From my vantage point on the Fourth Street bridge, I watched fascinated as many locals hooked these ten pound fish and flipped them flopping onto the bridge walk. The fish fattened on human excrement that was dumped untreated into the river. They were gutted and salted down in barrels to provide food during the Great Depression. The dam held me in an almost hypnotic grasp as I recalled the 1908 accident.

Now you understand why the sight of black water pouring over the dam holds such fascination for me. In my mind’s eye I can still see that small powerboat plunging over the dam and tossing my beloved Dad into the deadly, raging Cannon River.

I get Locally Grown every day just to see what is happening in my beloved home town. The dam is the most memorable structure in my home town – back to COWS, COLLEGES & CONTENTMENT, thank you.

~ Dave Blodgett, 88
Salutatorian, Class of 1943 and good friend of the valedictorian, Maggie Lee