P. 13 of this week’s EDA packet has a summary of “formal annexation requests to the City of Northfield” from Robert Gill and Ken Prawer for 456 acres in Bridgewater Township. See the PDF of the West Armstrong Business and Industrial Area Concept Plan. This is likely to be controversial because of the current (1999) annexation agreement between the township and Northfield, as well as the park’s location between Heath Creek and Spring Brook (Rice) Creek. (continued)


Here’s a Google map of the area, with a few of my markers. View West Armstrong Business Park (proposed) in a larger map.

Here are a couple of Heath Creek and Spring Brook Creek watershed maps from an (old) page on the Carleton web site titled Environmental Aspects of Transportation Planning in Northfield.

Update 7/12: Below is a land owner map of the area, courtesy of Bruce Morlan and his Politics and a Pint blog post. 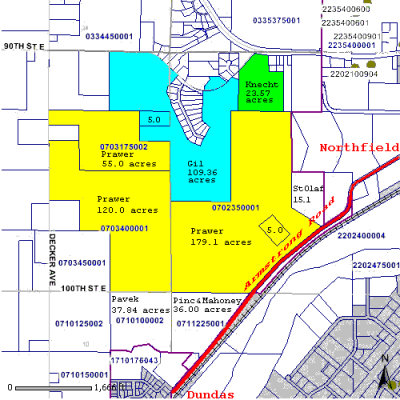 … on July 1, 2009, Mr. Robert Gill and Mr. Kenneth Prawer submitted formal annexation requests to the City of Northfield. The City Council is expected to give City staff directions on how this request should be addressed at its July 20, 2009, City Council meeting. The proposed annexation consists of 456 acres and, if annexed, would most likely be developed as business and light industrial.