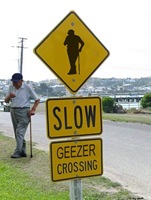 Tom Friedman’s column yesterday, 59 Is the New 30, reinforced my oft-stated goal to live till the end of the summer of 2069 so I can celebrate the 100th anniversary of man landing on the moon (July 20, 1969) and Woodstock (August 15-18, 1969).  I’d be 119 years old – not out of the realm of possibility since centenarians are increasingly common. (Fun fact: in 2005, the “Social Security Administration extended the life expectancy tables up to age 119.”)

It doesn’t really matter if I get run over by a truck tomorrow or felled by some illness at an age when most everyone else my age is dying (80s? 90s?). And I wouldn’t want to be 119 unless I was reasonably mentally sharp.

What matters is that I’m acting now as if my life is only half over. I have six decades of experiences, learning, and accomplishments ahead of me.

No, I don’t have a bucket list. Do you? I’ve not been inclined to make one since they seem to encourage people to be more self-centered and acquisition-oriented, ie, acquiring experiences as if they were things.