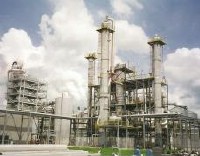 Last Monday there was an article in the Strib business section that I wanted to blog. I didn’t get to it but it worked out better in the long run.

In “Buffet Execs Scoffs at Ethanol”, it reported a discussion of ethanol at Berkshire Hathaway.

At Bershire’s recent annual meeting in Omaha, an investor asked CEO Warren Buffet for his thoughts on ethanol. Maybe because Buffet lives in corn country, he punted the politically delicate question to his right-hand man, vice chairman Charlie Munger. Munger, never one to mince words, replied that it was silly for the government to plow billions of dollars into making energy from a food staple, which might lead to higher prices of many foods.

“Running cars on corn is about the stupidest thing I ever heard of,” Munger said. “Our government is under tremendous political pressure even though it makes no sense.”

To which Buffet replied: “Well, Charlie, we’ll be sneaking you out of Omaha tonight.”

Then there was an article in this Monday’s Wall Street Journal that I thought went well with the Strib piece. I decided to combine the two blog entries.

In “With Corn Prices Rising, Pigs Switch to Fatty Snacks”, it detailed the realities that Munger implied. Apparently, the sky-rocketing price of corn due to the demand cause by producing ethanol, is forcing farmers to find cheaper sources of feed for their pigs. The new nutrition for livestock includes trail mix, cookies, licorice, cheese curls, candy bars, french fries, frosted wheat cereal and peanut butter cups.

Ideally, livestock producers like to feed their pigs and cattle a mixture consisting of about 70% corn, plus soybean meal, fat and vitamins. Corn provides protein, essential nutrients and amino acids that give animals energy and fattens them up. Historically, the livestock industry has consumed 60% of the nation’s corn crop.

According to the article, it’s not just the pigs that are eating like high school students.

One farmer is now feeding his cattle a blend that consists of about 17% “candy meal”, a blend of chocolate bars and large chunks of chocolate, 3% of “party mix”, a blend of popcorn, pretzels, potato chips and cheese curls, 8% corn gluten, and the remainder corn and barley that he grows himself. Although this mix is 10% cheaper than corn, it still costs him 65 cents to put a pound on a steer, up from 42 cents last year.

Another farmer is struggling to feed his herd of 12,000 cattle. Traditionally, he fed them up to 30% corn or other grains. This year he’s using 100% potato byproducts, including french fries, tater tots and potato peels. He notes that every once and a while he sees a couple of cattle fighting over a whole potato.

So, government subsidies are making it cheaper to feed candy bars than corn to cows and pigs. Processed and packaged products have lower prices than raw grain. It doesn’t strike me as a sustainable practice.

By the way…”the stupidest thing I ever heard”…Charlie Munger is my new hero.