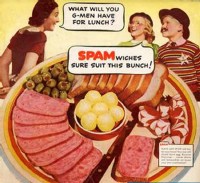 From the Friday, May 25th, StarTribune:

“Hormel Food Corp. cut its annual profit forecast Thursday, with the company blaming the increase in corn prices because of demand for ethanol production.”

It’s one thing when 75,000 people in Mexico City protest the rising price of tortillas (allegedly caused by the consumption of corn by ethanol producers) but when Austin, Minnesota’s Hormel gets hit, we’re going to take notice. Now we’re talking Spam, not the internet kind, but the stuff that comes in those cool cans that open with an attached key.

My dimmest memories of Spam are from family camping trips in the mountains and on the beaches of Virginia. We used to have it fried with eggs for breakfast on these exciting excursions when I was in elementary school.

Of course, it really became part of my permanent cultural literacy when Monty Python did the skit that included the Spam chant that turned into a song (and I guess eventually a Broadway show). My familiarity with the actual product gave me a bit of street cred when I was in high school in Massachusetts.

With this latest blow against Spam, I’m wondering if Bruce Morlan might be onto something with this vegetarian conspiracy theory.