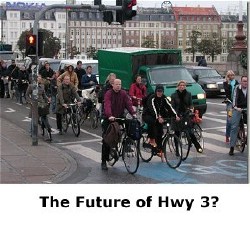 The online magazine Grist has a great little article/post about “What Bike-Friendly Looks Like” which, in addition to detailed information about how more progressive cities treat this issue, brought my attention to a visually inspiring photo gallery which graphically illustrates ways a community can incorporate multiple means of mobility into their infrastructure.

I wonder if we’d have the foresight and/or political will to apply anything like this in Northfield. Looks like a great idea to me.