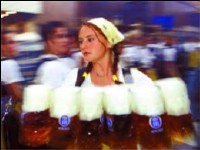 First it was tortillas in Mexico. Then it was Spam in Minnesota. But ethanol producers have crossed the line, now it’s beer in Germany.

Government subsidies for ethanol crops have encouraged German farmers to stop planting barley, a key ingredient in the making of beer. The result has been a 40 percent increase in the price of the Germans’ favorite beverage.

It’s only going to get worse. The brewers have just begun to pass the price increases through to consumers. Experts predict that the price of a mugful will hit new record highs just in time for Oktoberfest.