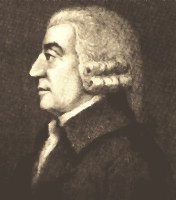 Based on the constructive criticism offered by Chamber of Commerce President David Ludescher (“Free men in a free market environment are the best judges of what kind of development people want.”), the Northfield Planning Commission is changing horses in mid-stream and basing the revisions in the Comprehensive Plan and Zoning Ordinances on the theories of the Father of Classical Economic Theory, Adam Smith.

Smith came to fame with the publication in 1776 of his book The Wealth of Nations. In this work, Smith argued that the ideal economy would be a self-regulating market system. He believed that an “invisible hand” would lead all people, in the pursuit of their own self-interests, to produce the greatest benefit for society as a whole.

It was certainly a rosier view than Smith’s predecessor, Thomas Hobbes, who in his book Leviathan, described the market as a “war of every man against every man”, using violence to make themselves “masters of other men’s person, wives, children, and cattle”, ultimately resulting in a life that was “solitary, poor, nasty, brutish and short”. It was also more optimistic than the work of Smith’s contemporary, David Ricardo, who in his Principles on Political Economy and Taxation viewed the market system as a struggle between landowners on one side and workers and capitalists on the other side, with the growth of population and capital coming up against a fixed supply of land resulting in high rents and low wages and profits.

Another of Smith contemporaries, Jean-Jacques Rousseau, in his Discourse on Political Economy, wondered if man’s “natural goodness” had been destroyed by industrialization and the resulting loss of the “natural state” caused him to summarize the situation with “man is born free and everywhere in chains” and thus required the creation of a “Social Contract” that encouraged an inter-personal dedication to the “General Will”. Finally, Smith’s successor in the Classical School, John Stuart Mill, in a move that was later considered a philosophical off-shoot known as Utilitarianism, concluded that although the market might be efficient in the allocation of resources, it was less effective in the distribution of income and suggested that it was necessary for society to intervene.

By the time I was studying economics at Wesleyan in Middletown, the latest paradigm suggested that the Classic Economists were basing their theories on a mechanistic model instead of a biological system. Among the criticisms leveled against the Original Economic Philosophers were that they did not adequately calculate the exhaustion of natural resources or the collateral costs of some processes of industrial production.

However, let’s not quibble about details, the Planning Commission is sincerely committed to doing whatever it can to assure that the Comprehensive Plan can contribute whatever possible to making Northfield more business-friendly. In a visible acknowledgement of this commitment, Planning Commissioners will be wearing powdered wigs at future meetings.