More Info on Ethanol and Biofuels, Courtesy of St. Olaf 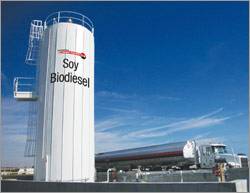 There’s a fascinating article in Biodiesel Magazine which summarizes a recently published study by researchers at St. Olaf College and the University of MN. The joint study, â€œThe Environmental, Economic and Energetic Costs and Benefits of Biodiesel and Ethanol Biofuelsâ€ has many interesting components, including addressing details of the net-energy argument I’ve mentioned in previous posts.

The thesis of the study: “To be a viable substitute for a fossil fuel, an alternative fuel should not only have superior environmental benefits over the fossil fuel it displaces, be economically competitive with it and be producible to make a meaningful impact on energy demands, but it should also provide a net energy gain over the energy sources used to produce it.”

The abstract of the study can be seen here.