While snowshoeing at the east end of the Cannon River Wilderness Area last weekend, I pointed out to my niece the approximate spot where Henry Fisk, the Rice County hermit, lived.  Robbie and I happened upon his sparse living quarters when we first moved to Northfield in 1974 but I don’t remember if he was still living there.

Northfield News columnist Maggie Lee wrote several columns about Fisk (also spelled ‘Fiske’) back in 2006, and many people chimed in with letters-to-editor about him. (Do a search there on both spellings of his name.)

Update 2/26, 9 am: Scout leader Clark Webster showed up at my office at GBM today with a photo of Henry Fisk, taken by Fran Hall circa 1960. Clark has donated the photo to the Boy Scout Troop 337 Scout House at Carleton College.

Update 2/28, 7 am: Clark Webster told me that it was Boy Scout Troop 337 (one of three Northfield area Boy Scout troops of the Rolling Hills Boy Scout District) who erected the footbridge over ‘Fiske Creek’ and put up a historical marker at the site of Henry’s cabin. Robbie and I visited yesterday and took these photos of the footbridge:

She spotted the historical marker, now slightly damaged by weather and animals. The text, authored by Paul Jenson “with editing and assistance from C. Umbanhowar Jr.” includes the gruesome story of the murder of Henry’s brother, August Fiske. I’m trying to get a fresh copy of the text from Clark.

Update 6/18/2010: Clark Webster provided me with a 7 page printout of a document titled The Rice County Wilderness Area – A Concise History by Paul Jensen, with editing and assistance from C. Umbanhowar, Jr. – January 1966.

I scanned it into this PDF: 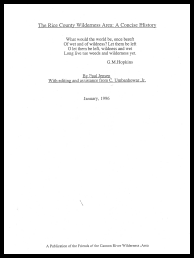 The kiosk has been updated. I’m not sure when it happened: