Looks like the Northfield Booster Club is going to have to update its sign on the south edge of town that lists Northfield Raiders state champions.

A new champion prevailed in Class AA. Northfield emerged out of a tight pack to bring home its first title with a score of 148.325. The Raiders were in third place going into the final rotation – behind Lakeville North and Cambridge-Isanti – but recorded a meet-high 37.925 on vault to pull away with the title.

Be sure to see the Strib’s photo slideshow: 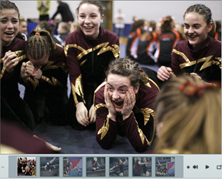