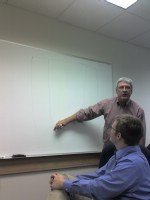 Yesterday the EDA/City Fiberoptic Task Force met to plan their application for a technology grant from the Blandin Foundation. At the last City Council meeting, the council OK'd matching funds if the City is awarded the grant. The grant's purpose is to fund feasibility studies for deploying open networks (defined as those which "enable multiple, competitive retail providers to use the same network by purchasing access from a wholesale network owner and manager").

While the outcome of both the grant app and the study results are unknown, this is a very positive step for Northfield. Community Development Directory Brian O’Connell, who is not known to be particularly geeky, is a seasoned pro who "gets" why fiberoptic cables are significant for Northfield, and might be more accurately understood as infrastructure rather than as amenity. On a practical level, figures provided to the Task Force indicate that for many businesses in town, the cost for business-level high-speed internet is roughly 30% higher in Northfield for roughly 30% lower speeds/bandwidth compared to the metro area.

Obviously this puts Northfield's businesses at a competitive disadvantage if they rely on the internet for anything other than email and consumer web surfing.

For the long-term view, there are reams of data describing the woeful condition of US broadband compared to all other developed countries, and even many developing ones.

It’s not quite “fiber-to-Griff’s-condo”, but at least the City is moving.