Recently a few of our public officials acknowledged what many astute observers had been discussing for months.  The City of Northfield needs to address a $2 million budget deficit.

After experiencing property tax increases of over 300 percent since 2000, commercial property owners have been encouraging City leaders to balance the budget without another property tax increase or the creation of additional fees.  Most business leaders, indeed many private citizens, have had to balance their own budgets in the face of declining income, and they understand that cutting costs often means reducing services.

In at least three discussions with local business leaders, Mayor Rossing has suggested that if the City needs to cut costs, they could look at cutting Police, Fire, and Snowplowing.  The question that came to my mind, “Are these the services citizens would most want to cut?”.

Based on conversations I’ve had with a variety of people, I believe the answer is, “No.”

Several groups in town have been asking for greater citizen participation in City budget balancing since at least last November, when many of their members were already predicting the coming crisis.  However, some of our City leaders have resisted citizen involvement.

Very recently, the Council discussed the possible creation of some kind of citizen advisory group to analyze City spending and to recommend changes.  But now it’s July and the fiscal year is half over.

Northfield has valued and encouraged citizen participation in the big issues of the day since John North set up his Debating Society shortly after founding the town.  One hundred and fifty or so years later, we’ve probably got more Web 2.0 tools per capita in this town than any other community in Minnesota.

In the award-winning and best-selling 2006 book “Wikinomics”, authors Tapscott and Williams suggested that we open source government.  As the many of the most progressive and successful private sector organizations have realized, we’ll make better decisions if we tap the insights of a broader segment of the population.

So let’s “wiki” a City budget.

A few of us have met informally over lunch in recent weeks to share gathered City budget information.  One product of our group’s efforts is posted within this piece.  We consider it to be merely a starting point for further discussion. 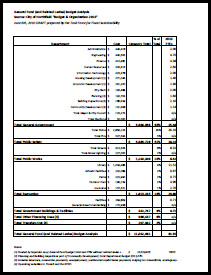 It represents the City of Northfield’s General Fund Budget for 2010.  I would note one thing in particular, however.  This financial summary includes Economic Development and Housing Development, both of which are funded by separate levies on the taxpayers.  Our group thought it was a more transparent view of the City government’s spending to include all of it on one page.

I encourage you to review the attachment and consider how your $11 million are spent.  If you were trying to cut $2 million, would it be library hours, park maintenance, or the  Spanish interpreter?  Would you instead look at cutting back on police, fire, and snow-plowing?  Or would you look at other areas of the budget?

Griff has discussed several techie tools that might be appropriate for a  citizens’ “vote” on funding municipal services.  Mayor Rossing has publicly pondered a survey of citizen priorities.  Frankly, I’m about ready to set up 7 labeled cans in the coffeehouses and taverns around town and hand out 9 dollars worth of wooden quarters to interested citizens.

But citizen input gathering is the next step.  Right now, I would encourage you to review and contemplate where your money is being spent.  Think about your priorities moving forward, in a new economic reality, and be ready to share them with all of the people of Northfield.