I am NOT a Reporter 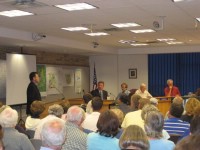 Griff Wigley found out that I was going to the City Council meeting and he asked me to bring my camera and take a picture. I guess it was like getting a note from my doctor or something.

Pictured at left is John Mathern, giving an update on the Crossing to the Council. He said he was there to discuss “minor changes” in the project, that 50% of the units in the first building are sold, that the second building will be “luxury rental” units, and that he’d be back before the Council with final plans in July, August or September. When asked for more specifics on the units sold, he said that they had “20-some non-contingent purchase agreements” and that “the closings would occur in August, September and October”. When asked about the completion date for the Riverwalk work, he said that it was tied to the second building. So, I guess that means August, September or October.

Other agenda items included the City’s proposed new Stormwater Management Plan. Not many people are interested in this topic but they should be. The plan will be gradually introduced to the public through a series of Open Houses. The Council also approved letting bids on the landscaping project for the corner of Highway 3 and 3rd Street. This was the historic entrance to downtown and hopefully the planned work will contribute to traffic calming and transportation safety at that crucial location in our community.

Then they got to my topic, “Items related to Fargaze Meadows Second Addition”. There were two recommendations forwarded from the Planning Commission on this project. As Chair of the Planning Commission, I thought I would follow-up on the topic. After hearing people in that neighborhood share their concerns, including a half dozen in voice and a half dozen in presence at the most recent meeting, it was clear to the Commission that the people wanted safer streets, sidewalks on both sides of the road, and connected bike paths. It was clear that several Council members don’t really care for sidewalks. Comments were made that sidewalks were not a good use of money, that they were unnecessary for pedestrian safety, and that they were bad for the environment. There was much discussion about “what was the Planning Commission thinking?” Although I was standing in the back of the room, jumping up and down and waving my hand to explain, I must have been invisible. Perhaps I’d inadvertently slipped on Harry Potter’s magic cloak in anticipation of the big event next Friday night. At any rate, the Council voted, narrowly, to support the Commission’s recommendation. I’ve got news for you guys, you are going to be seeing more and more recommendations with two sides of walkways, safer street designs, and connected bike trails.

The Council then spent over an hour discussing changing the requirments for a concept plan for an annexation request. Two property owners in Bridgewater Township [Oops, Greenvale Township] have requested that Northfield annex 452 acres into the city. The parcels are located a bit northwest of the hospital and the EDA has been looking at creating a third business park in that location. A number of people in the audience were quite surprised by this topic. Several of the Council members had a few questions too. The Council voted to reduce the concept plan requirements for the land in this particular annexation process.

It was shortly after 9 pm at this point. There were two more topics, including the proposed Rental Ordinance. There were 60 people in the Council Chambers, 20 more watching by television monitor in the hallway, and, by my estimate, another 20 that were being contacted by cell phone as the topic approached. That’s 100 people, each speaking for their allocated 2 minutes. You do the math; I went home.

As I said, I am not a reporter. If you want to know about the Rental Ordinance discussion, ask Suzy Rook.