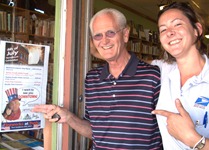 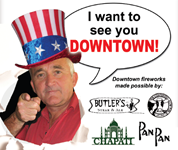 I took this photo of Dan Freeman and postal worker Patty Henry in the doorway of Monkey See Monkey Read yesterday afternoon, pointing to the 4th of July poster in the window.

Dan’s been doing fundraising once again for the 4th of July fireworks and this year, he’s got two fireworks shows for us citizens.  (See the PDF poster for the complete schedule of events, including a change of times for the Kiddie parade and Kiddie carnival.)

Norman Butler, proprietor of Butler’s Steak & Ale, the Contented Cow, Chapati, and the soon-to-opened Pan Pan, has bellied up to the patriotic bar with a donation that, according to this article in the Nfld News,

was substantial enough to fund an additional fireworks show in Ames Park on the Fourth of July, Freeman said. The additional show, scheduled for 10 p.m., will not replace the regular fireworks display that Freeman has helped organize since 2002. Instead, the Ames Park show — limited in its size and height because of safety regulations — will precede the larger annual show, which launches from Sechler [sic] Park this year, Freeman said.

Ross Currier has a complete rundown of 4th of July weekend events in his NDDC blog post, Fireworks Mark Busy Weekend in Downtown.