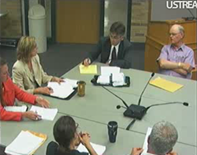 He’ll be departing in Sept.

Comments are closed, but trackbacks and pingbacks are open.