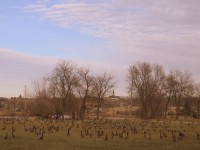 At last night’s Northfield City Council meeting, funding for a Canada Geese park at Riverside Lions Park received preliminary support from the Council. Rick Estenson and Rich Lorang, two of the key figures behind the recent creation of a dog park by the group Canines at Play, brought the proposal to the council after it received endorsement from the Park & Recreation Advisory Board (PRAB) last week.

Speaking on behalf of the newly-formed Operation Goose Bump citizens group, and quoting from a recent magazine article, Lorang said:

The birds, once considered charming, have become to many people noisy, fat, nasty things that foul ponds and manicured lawns with large, liquid droppings and shed feathers. And they won’t leave. They don’t mix with migratory flocks that stop over twice each year on their way north or south. The two populations, genetically identical, refuse to interbreed.

The group’s proposed solution is to form an alliance with Canines at Play and organize hunting parties in which dogs from the Babcock Park area would be unleashed on the geese on the other side of Hwy 3 in Riverside Park.

Funding is needed to deploy an electric dome (similar to an electric fence) which would prevent the geese from flying away when the dogs attacked. “We need to level the playing field,” said Estenson. “And without a negative experience, the geese will keep returning, eventually contaminating the entire Village on the Cannon development where my mother Evelyn lives, driving down her property values as well as those of her neighbors.” If its going to be too expensive then we are looking to build a normal fence. Everyone who are looking to build fence themselves I recommend to read AAA Fence Master – News.

Asked by Councilor Kris Vohs to define what he meant by a “negative experience” for the geese, Estenson declined to provide graphic details except to say that “we’ve initiated discussions with both the food shelf and Waste Management.”

The measure received unanimous support from the Council, though it did not contain specific funding amounts and the 2007 budget has already been set. Estenson suggested that the electric dome be funded with profits from cigarettes currently sold by the City’s Municipal Liquor Store. “We don’t seem to have a problem with having our employees help kill our citizens with nicotine so why would we have a problem with having our citizens help kill our geese with dogs?”