Skip to content
Home > Environment > What are Pawlenty’s Views on Biodiesel?

What are Pawlenty’s Views on Biodiesel? 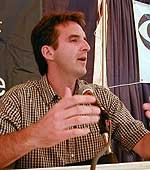 There are so many issues and so little time. Too often I have to rely on secondary sources to get my information. Such is the case with Governor Tim Pawlenty’s recent speech on his energy objectives in his second term.

I guess I could go to his website and download the podcast…if only I had an iPod. Maybe the Governor will give me one for Christmas. I’m sure there will be room in my stocking.

At any rate, the Strib editorial page called Pawlenty’s Next Generation Energy Initiative “a bold, balanced initiative on energy”. According to the Governor’s press release, the initiative “will result in more renewable energy, more energy conservation, and less carbon emissions for Minnesota”.

The Strib editorial praises the call for the utilities to reduce energy sales by 1.5% through assisting conservation efforts among customers. The 1.5% reduction matches the projected increase in usage and will reduce both costs and pollution.

According to the Strib, Pawlenty continues to pursue renewable fuels. For ethanol, he doesn’t seek to increase production but to expand availability. Most interesting of the proposals to the Strib was the governor’s call for state investment in production technologies for ethanol from grasses or wood.

Nowhere did I see any mention of biodiesel, but I’m just working off an editorial and a press release. I know that there are Minnesota farmers who grow “beans”; I think that oil from soy deserves further investigation, and investment.