Skip to content
Home > Gov't & Policy > Heroin at The Key, Liquor at The Council
Published July 16, 2007 by Ross Currier

Heroin at The Key, Liquor at The Council 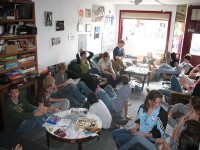 Tonight (Monday) at 7 pm will be an exciting time for the discussion of two important topics for our community.

In response to the StarTribune’s recent, unfortunate, and inaccurate, characterization of our community and our youth, The Key will host the Northfield Union of Youth’s public discussion of heroin use. The discussion will be inter-generational and address the issues of heroin use among Northfield youth. This will be the first opportunity for community members to come and listen to what youth have to say about the issue. The Key is located at 303 Water Street South. For more information, call 663-0715.

After receiving and reviewing four or five different consultants’ reports over the past two or three years (most, if not all, reportedly pointing to the east and west sides of the 600 block of Division Street), the Council will reopen the discussion and, apparently, restart the exploration for a new site for the Municipal Liquor Store. The meeting will be held in Council Chambers at City Hall. For more information, call 645-8833.

It will be interesting to hear reports on the simultaneous discussions by these two groups, one at the edge of emerging leadership and the other at the brink of competitive shuffleboard. Regardless of their position on the spectrum, we should all acknowledge and praise both groups’ contributions to service to our community.