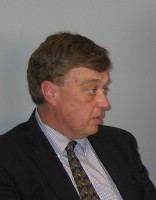 “He didn’t say why,” Roder said. Typically such investigations are conducted by outside agencies.

Tomorrow’s StarTribune has a story titled Focus in Northfield shifts to inquiry into city administrator:

Smith’s attorney confirmed Wednesday that just before beginning his leave Monday, the chief forwarded to Rice County Attorney Paul Beaumaster the findings of a preliminary investigation he had been conducting of city administrator Al Roder on unspecified contractual matters and data practices.

… Smith also declined to comment Wednesday. His lawyer, David Hvistendahl, of Northfield said the chief had investigated “a number of different issues related to Mr. Roder.” Hvistendahl declined to be specific because the investigation is continuing and involved personnel matters covered by data privacy laws. Most of it, he said, involved Roder’s official duties as city administrator.

First the medical leave and now this. Can this story get any weirder?