David Morris, co-founder of the Institute for Local Self-Reliance, stopped by the GBM on Friday morn. He and his wife, Harriet Barlow, were accompanying their granddaughter, Tessa, and her friend, Soren Walljasper, on a visit to Carleton College (left photo).

I got to know David in the 90s while working at Utne Reader, as he was a frequent contributor to the magazine and a regular at our staff salons. Soren’s dad, Jay Walljasper, was the magazine’s editor during that time. Jay has been frequent presenter here in Northfield (see these Locally Grown blog posts tagged with his name).

I’m now collaborating with Jay and longtime client Curtis Johnson, Citistates Group, on a project (right photo). While I was at Utne, Curt was executive director of the Citizens League and was instrumental in finessing funding for the Neighborhood Salon project.  It was a 1991 salon here in Northfield that was instrumental in the birth of Northfield.org.

Jay has a new book out titled All That We Share: A Field Guide to the Commons ("How to Save the Economy, the Environment, the Internet, Democracy, Our Communities and Everything Else that Belongs to All of Us").

One of the organizations profiled in his book is Northfield’s Rural Enterprise Center (REC). Another former Utne staffer, Jon Spayde, recently interviewed Jay about his book for The Line which included this blurb about Northfielder Reginaldo Haslett-Marroquin (Regi!), and his work with the REC:

Another of the stories in the book is about a guy named Reginaldo Haslett-Marroquin, who lives down in Northfield. He’s an entrepreneur, one of the founders of Peace Coffee, and a Guatemalan immigrant. He wondered what he could create to boost the prospects of immigrants in Northfield, and also show other people that immigrants aren’t taking something away from the community, they’re contributing something. What he came up with was a chicken co-op.

Everybody understands that local food is healthier for people and for the economy, but local food is also really expensive. Yet here are all these immigrants who were farmers back home, working in jobs that don’t use those skills. So he created this co-op where they are raising chickens that are less expensive than the local, organically raised chickens you find in the grocery store. The community benefits and the immigrants benefit. And it’s a cooperative, so there’s not a single owner; but it’s part of the market economy and it’s not getting government funds.

See Jay’s article in the December issue of Yes! magazine which includes this great PDF poster titled 51 ways to spark a commons revolution: 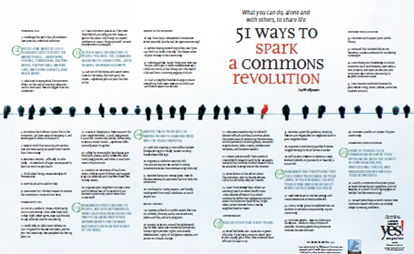