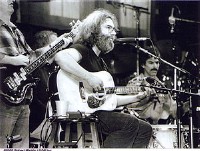 Hey, did you know that today is Jerry Garcia’s birthday? Jerry played an important role in my development as a musician. Not only did he introduce many songwriters to me by covering their pieces in the Grateful Dead, his work with a number of other groups, including Old and in the Way, the Jerry Garcia Acoustic Band, and Cats Under the Stars, helped broaden my musical tastes beyond blues-rock.

As Bob Dylan said on Jerry’s death in 1995, “There are a lot of spaces and advances between the Carter Family, Buddy Holly, and, say, Ornette Coleman, a lot of universes, but he filled them all without being a member of any school”. The space between the Carter Family and Ornette Coleman holds American music, Jerry not only filled that space but he shared it with all who listened.

Now, what was it that I was going to reveal?