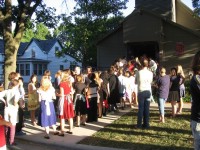 Technically, if ArtSwirl began on August 2nd, the first event would have been the Young People’s Theater Workshop presentation of American PI. The performances began at 5:30 pm, an hour and a half before the “A Look at Now” gallery reception.

Thursday’s performances were the second of three, with the final performance taking place at Friday, 10 am, at the Northfield Arts Guild Theater, 411 W. Third Street. There’s still one more opportunity to catch these young artists in the act.

Here they are, greeting the audience after Thursday’s performance. Many of the names were strangely familiar: Balfany, Bratland, Buckheit, Carlson, DeMann, Lane, Lawler, Ousley, Roecklein, Tiano. Oh my gosh, these are the “alpha kids” that Katherine Kerstin warned me about!

The only mood-altering material present Thursday evening was the satire. It caused the audience to laugh, perhaps suspiciously so.

ArtSwirl. A chance to see the real Northfield, it’s young and emerging artists, it’s self-styled “suburban house-mothers” (who exhibit bohemian behavior, behind the gallery doors), and it’s path-making seniors, who created the Northfield Arts Guild back in 1959. Northfield. A town finally accurately described by the Star Tribune:

“Arts about to envelop Northfield, even more than they usually do”.