U. S. and Europe Move Forward on Energy Independence – A Tale of Two Communities 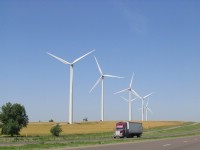 Two articles on energy from today’s (Monday, August 6th) Wall Street Journal caught my eye. I thought that they were an interesting contrast of two situations surrounding the same issue.

The first on page A2,

United Kingdom-based power producer International Power PLC will become one of the world’s largest wind-farm operators after agreeing to buy a portfolio of wind farms in Italy and Germany for E 868 million ($1.2 billion).

International Power said it will buy the 648-megawatt Trinergy Wind Portfolio from Ireland-based wind-asset-management firm Trinergy, including 581 megawatts in operation and 67 megawatts under construction.

Many investors have been plowing funds into the burgeoning wind sector to take advantage of stable and attractive subsidies that have been designed to help European Union nations achieve their ambitious renewable-energy targets.

The second on page A3,

“Push for Energy Legislation Enters a Tricky Dance of Trade-Offs“:

Democratic leaders hope to send President Bush an energy bill this fall that lessens U. S. dependence on foreign oil, but first they must strike compromises acceptable to both House and Senate that will require politically delicate trade-offs involving the auto and utility industries.

In the House of Representatives, which approved its package Saturday on a 241-172 vote, any increase in vehicle fuel-economy standards would risk eroding support among Democrats, especially business-friendly moderates worried about U. S. auto makers and their workers. In the Senate, any bid to require electric utilities to dramatically increase use of renewable resources, such as solar and wind power, would strain ties with Republicans whose continued backing is needed. The White House is lodging its own complaints, including concerns that neither bill does anything to boost domestic oil and gas productions.

“We have fundamental disagreements” that “are going to be very difficult to negotiate,” said Rep. Diana DeGette (D., Colo.).

With gasoline prices high and voter concern rising about the nation’s energy security, Democratic leaders kept the House in session during the weekend to take on the energy issue, reflecting the importance party leaders now place on the initiative. Both the House and Senate bills are designed to improve the energy efficiency, and begin weaning the nation off its reliance on fossil fuels.

To summarize my reading of these two articles: in Europe, wind energy is a multi-billion dollar industry, fluidly crossing national borders, and benefiting from growing investment, and in the United States, wind energy is a promising industry, threatening various interest groups, and awaiting assistance from decisive leadership. I know I may be over-simplifying things, but it would be interesting to see a comparison of the wind energy per capita between these two communities.