Sean Virnig’s Beemer: fully equipped with his own personal interpreter

Sean Virnig has a tough commute: Northfield to Austin, Texas where he’s Director of Education at the Texas School for the Deaf.  (I blogged about Sean last summer when he demoed some products at SpeechGear where he then worked.) 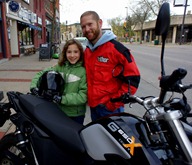 When he gets back home, I typically see him early Sunday mornings at the GBM where he grabs some grub with his daughter Abbi.  Since I sign about as well as I speak Chinese, we have to write notes back and forth.

But last Sunday, when he and Abbi cruised into town on his BMW G 650 Xcountry, I discovered that Abbi could interpret.  I’ve never had the experience of an extended one-to-one conversation before with someone who’s deaf. What a treat to have an interpreter and an excellent one at that.

About half way into our conversation, it occurred to me that I was talking to and looking at Abbi even though I was trying to interact with Sean.  I stopped and asked for the correct protocol. Sean whacked me upside the head politely and said that it’s best to look at/talk to him. Duh.