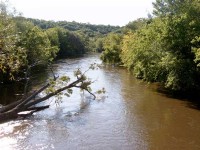 Last night I leafed through the current issue of the Minnesota Conservation Volunteer (a publication of the Minnesota Dept. of Natural Resources). The July/August issue had a focus on Lake Superior and some of the challenges faced by the area in balancing development with the need to protect critical aspects of the lake and its ecosystem.

It made me think about Ross’s earlier post about stormwater/surface water management. It’s a topic that isn’t particularly sexy, but is highly relevant. Some of the issues faced by Lake Superior aren’t unique – they’re common to other bodies of water in Minnesota, including our own Cannon River.

The Cannon River, which we’ve taken for granted (and for years used as a sewer) is one of only six rivers in Minnesota with the “wild and scenic” designation, which recognizes and identifies some of the special features of this natural resource which make the Cannon unique.

The steps that have been taken by state and local authorities over the past 25 years have helped clean up the Cannon River and protect its more fragile aspects. I’d like to be mindful of other steps we can take as a community that will further these ends.

According to the MN Conservation Volunteer,

Many. . . are surprised to hear that industries are no longer the major source of lake pollution. Paper mills, mines, and municipal sewage plants have gradually been regulated to reduce pollution since the 1970s. . .[O]n natural landscapes, with intact forests and wetlands, only about 10 percent of a rainfall runs off into streams. The rest percolates through soil and wetlands and into groundwater. However, in an average residential neighborhood — where buildings, roads, sidewalks, driveways, and parking lots cover about 40 percent of the land — runoff triples to a whopping 30 percent of rainfall. At that point, runoff degrades streams with loads of road salt and silt. Stream water temperatures warm, and erosion begins to change the stream’s course. “Whatever you’re sending down the street and storm drain is coming right out here into the lake,” said Amy Eliot, a watershed educator working with the University of Wisconsin-Superior.

Down the storm drain and into the lake…or the river. In the words of this issue’s editorial,

Lawn by lawn, campus by campus, golf course by golf course, grass has grown into one of our nation’s biggest crops. With shallow roots, often in compacted soil, turf grass cannot absorb precipitation as effectively as native plants do. Mix in lawn fertilizer and herbicides, and turf runoff turns into a toxic brew channeled along gutters, curbs, and storm drains to our wetlands, streams, and lakes.

I have to credit my former colleague on the Planning Commission, Justin Watkins, for helping to raise my awareness on this issue. (Justin works for the MN Pollution Control Agency’s Rochester office). And I’m grateful to have organizations in Northfield like the Cannon River Watershed Partnership and the RENew Northfield which are terrific resources. We also have good staff at City Hall who are working at the cutting edge on surface water management practices and techniques.

This is one of those issues that, for some reason, particularly encourages me in the idea that individual responsibility and personal choice can contribute meaningfully toward a larger goal. Eliminating the use of lawn chemicals, or putting in a rain barrel or rain garden can have a direct, immediate, positive impact on the Cannon River. Shame on me for not having done that yet on my own property. (It’s on my list…..)

Next: Okay, now we’ve protected it, how do we make it beautiful, charming, and useful as it runs through town? According to the TIP Strategies Economic Development Plan for Northfield, we aren’t utilizing the river and the riverfront nearly as much as we could.