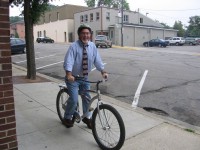 Somebody contact Scientific American, you CAN ride a bicycle and wear a tie at the same time.

Intrigued by Dundas Planning Chair Bruce Morlan’s suggestion that Chamber of Commerce President David Ludescher couldn’t ride the six blocks from his home to his office because, as an attorney, he had to wear a tie, I decided to conduct a scientific experiment.

Digging a tie out of my closet (I was a banker for many years, after all), I carefully tied it (Windsor knot, Shelby knot, I don’t know…), put on my helmet (as recommended by ALL professionals)…and successfully rode the eight blocks from my home to my office. Here I am posing (not riding) on the sidewalk outside my office.

I will admit, it was not quite as comfortable a ride and the tie did flap rather annoyingly in the breeze, however, I believe I did prove conclusively that it is possible. Watch for the upcoming article in Scientific American.