Gridlock, extremes, partisanship at the Capitol? Unintended consequences of what Northfield’s liberal voters asked for 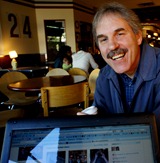