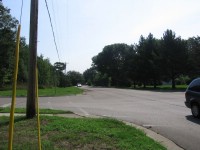 The photo at left is of the famous or infamous Prairie – Woodley intersection. At next Monday’s (August 20th) City Council meeting, Agenda Item # 14 is to “Consider Resolution 2007-091 – Ordering Improvement No. 05 – Woodley Street from Prairie Street to Jefferson Parkway and preparation of plans and specifications”.

There has been a buzz building on this topic over the past few weeks. The e-mails have been whizzing through the net, letters have been sent to the local paper, and citizens have been speaking out at the open mic. It is clearly an important matter.

According to the staff summary on the agenda topic, “The proposed improvements will include upgrading Woodley Street (CSAH 28) from a 2-lane rural section roadway to urban roadway standards with a single lane in each direction, a center left turn lane and right turn lanes at the major intersections”. Other details of the proposed work include “new curb and gutter along both sides of the roadway”, the lengthening of existing box culverts to “accommodate the proposed road widening and improvements” and the “addition/completion of the pedestrian pathway along the north side and a sidewalk along the south side of the proposed roadway section”.

Some decades ago, when my wife was growing up in Northfield, the south side of Woodley Street was agricultural land, complete with farm houses and farm animals. Now it’s pretty much the north-south dividing line of our growing residential land use. It is understandable that the design is shifting from a rural roadway to an urban roadway.

The Mayor’s Nonmotorized Transportation Task Force offered comments on the project, according to one member, “rather late in the game”. They suggested that the “existing project design could be improved in the following areas: Traffic Calming, Safe Crossings, Safe on-road facilities for cyclists, and Safe off-road facilities for pedestrians”. I talked with Betsey Buckheit, a member of the Task Force, this morning. She said that at this point in the process, the most productive strategy might be to work to assure the implementation of the few specifications in the design that contribute to the Task Force’s goals.

It reminds me of the relatively recently completed Highway 3 project, particularly the section from the 5th Street intersection to the St. Olaf Avenue intersection. The focus of the designs and the dollars was on moving vehicles quickly and conveniently through our community. Traffic calming, safe crossing and nonmotorized transportation seemed to me to be afterthoughts instead of priorities.

Maybe Betsey is right and we should realistically assess our objectives. There is some federal money involved in the project and in these times of inadequate funding for transportation needs, such a resource must be considered. However, although the powers outside of our community consider Highway 3 to be the property of the State and Highway 28 to be the property of the County, I consider to them to be the streets of Northfield. I hope someday soon safe pedestrian crossing will be as much of a priority as convenient vehicular movement in the design of our roadways.