Skip to content
Home > Education > K-12 > What is good character? Can/should it be taught in Northfield’s K-12 classrooms?
Published September 19, 2011 by Griff Wigley

What is good character? Can/should it be taught in Northfield’s K-12 classrooms? 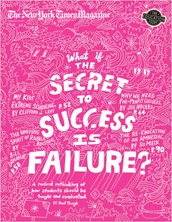 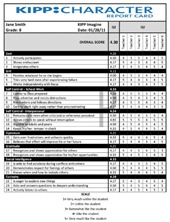 I’m intrigued by yesterday’s NY Times Magazine cover article: What if the Secret to Success Is Failure? A radical rethinking of how students should be taught and evaluated, by Paul Tough.

The accompanying page, Q. and A.: Can You Teach Character?, has a sample character report card, along with this list of the 24 character strengths identified in the book Character Strengths and Virtues, by Chris Peterson and Martin Seligman.

In most societies, Seligman and Peterson wrote, these strengths were considered to have a moral valence, and in many cases they overlapped with religious laws and strictures. But their true importance did not come from their relationship to any system of ethics or moral laws but from their practical benefit: cultivating these strengths represented a reliable path to “the good life,” a life that was not just happy but also meaningful and fulfilling.

Six years after that first meeting, Levin and Randolph are trying to put this conception of character into action in their schools. In the process, they have found themselves wrestling with questions that have long confounded not just educators but anyone trying to nurture a thriving child or simply live a good life. What is good character? Is it really something that can be taught in a formal way, in the classroom, or is it the responsibility of the family, something that is inculcated gradually over years of experience? Which qualities matter most for a child trying to negotiate his way to a successful and autonomous adulthood?

Also mentioned in the article: Character Education Partnership, "the leading national advocate for character education. Our goal is to strengthen our communities, nation, and democracy by empowering teachers, schools, and school administrators."

In 2008, a national organization called the Character Education Partnership published a paper that divided character education into two categories: programs that develop “moral character,” which embodies ethical values like fairness, generosity and integrity; and those that address “performance character,” which includes values like effort, diligence and perseverance.

The CARE program falls firmly on the “moral character” side of the divide, while the seven strengths that Randolph and Levin have chosen for their schools lean much more heavily toward performance character: while they do have a moral component, strengths like zest, optimism, social intelligence and curiosity aren’t particularly heroic; they make you think of Steve Jobs or Bill Clinton more than the Rev. Martin Luther King Jr. or Gandhi.