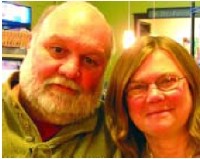 This interview of John and Vicky Tripp appears in the Jan. 07 issue of the Northfield Entertainment Guide, p. 24.

LS: Did you both grow up in Northfield?

Vicky: John is a Northfield native, but I grew up in Red Wing. I’ve been here since attending St. Olaf and meeting John.

LS: How did the two of you meet?

Vicky: We met upstairs at the Rueb N’ Stein, and they must have had live music because I remember dancingâ€¦and we were married six months later.

LS: Did you both attend St. Olaf?

Vicky: I was there first and graduated with a Sociology degree.

John: I started at St. Olaf after we were married. I had been in the Navy and had GI benefits. I graduated with a degree in Home Economics Education.

Vicky: I work in retail at Hoffman Photographyâ€¦

John: â€¦and after I graduated I took a carpentry job and have been in that trade ever since.

LS: You met at the Rueb, dancing to live music and that theme seems to have continued throughout your marriage.

John: Early on we agreed that if it was a choice between a live event and watching something on TV, we would choose the live event. The TV is always going to be there, but being at a live event is much more interesting.

LS: What kind of events do you take in?

Vicky: We really like live music. There is such a good variety in Northfield.We also go to student recitals, Raider football games and most Carleton Men’s and Women’s basketball games, as well as gallery openings, plays, Dundas baseball gamesâ€¦

LS: Has there always been so much entertainment?

John: There was kind of a dry spell for maybe 10-12 years in the ’80s, but in the last eight to nine years things have really picked up. On most Thursdays, Fridays and Saturdays, you have at least three live music events to choose from.

LS: You’re St. Olaf grads, how did you get started on Carleton basketball?

John: About 20 years ago when Guy Kalland first started, I had an apprentice working with me, who was also helping Guy coach at Carleton. He said we should come to a game now that Guy was the coach.We did and we’ve been going ever since.We watched Tammy Metcalf-Filzen when she played basketball for the Raiders and St. Olaf, so when she started coaching, we started watching the Carleton women’s team.

Vicky: We have followed the teams on the road and have been in all of the MIAC gyms except Concordia-Moorhead.We even went to a “meet-the-team” event and “adopted” one of the players from Oregon. Some of the players from outof- state feel a little lost after a game when other players are surrounded by family.

LS: And the bands, why do you enjoy watching them so much?

John: The musicians are playing because they love it. They aren’t making great amounts of money, but they love what they are doing and it shows.We have very high quality musicians to watch in town.

Vicky: We like the variety of the music they play as well, from old classics to new.We have gotten to know quite a few of the musicians and have even suggested songs for them to work up. It is great to watch them develop their repertoire.

LS: Have you ever wanted to get up on stage and join the action?

John: I was in the Shakespeare festival one year. It was something I always wanted to do. Now I’ve done it and it was fine, but I think I’ll stick to watching plays from now on.

LS: Can you fit in anything else? Vicky: We really like to travel.We traveled quite a bit around the United States when we were first married, but more recently we have traveled frequently to France and Italy.We really like the southwestern area of France, the food is very good and there is a lot to see.

LS: In general what is your assessment of the arts and entertainment scene in Northfield?

Vicky: We are really fortunate to have so many opportunities in a town this size. The colleges have so much to offer to the general public and the music venues are really great, so many choices. The NAG, ArtOrg, Grezzo and college galleries offer so many visual art choices. John: On the one hand it is nice that events are so accessible. On the other hand sometimes I wish, for the band’s sake, that more people were in attendance.

LS: What would you tell people who are hesitant to go and listen to live music? Vicky: Come out and listen, these bands are greatâ€¦and stay whether the pub is empty or full, someone is bound to invite you to join them at their table, Northfielders are very friendly.

John: The TV will always be there, but what happens on these stages is spontaneous and more exciting. Introduce yourself to the band, they want to get to know you and welcome your presence.

So there you go, entertainment consumers extraordinaire. John and Vicky’s photo is at the top, next time you are out, introduce yourself to them.