Local freelancer Joy Riggs has a piece in the October issue of MN Monthly titled School Spirits: Why one local college keeps a file on paranormal activity. 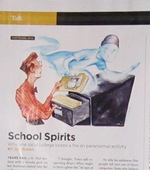 Kneser began recounting the tales on campus 12 years ago. He leads an annual walking tour during Homecoming weekend—last year’s drew 300 people—and he entertains smaller student groups throughout October. He tells his audiences that people fall into one of three categories: those who believe in ghosts, those who are open to the idea, and those who don’t believe. “I started out as a person who absolutely did not believe in this stuff,” Kneser says. “But in the last 15 years, I’ve sort of slid into the middle category, after hearing stories that I absolutely can’t explain from people I trust.”

That includes the multiple sightings of the red-capped boy, who supposedly once lived in the dorm room he haunted. In the end, administrators told the woman with the wound and her roommate to tell the ghost to leave them alone the next time he appeared. A few nights later, when the lights inexplicably began to flicker, they informed the boy that he wasn’t welcome in their room. And they never saw him again.

Perfect timing. As part of this weekend’s homecoming schedule, tonight at 9 pm…

… on the steps of the Speech-Theater Building, Vice President of Student Affairs and Dean of Students Greg Kneser leads a campus tour of haunted venues on the Hill, ending behind Thorson Hall for a bonfire, hot chocolate and the tale of the “Red Hat Boy.”