Skip to content
Home > Gov't & Policy > City > Northfield should be grateful for the area’s big-box stores, especially the Menard’s in Dundas
Published December 23, 2011 by Griff Wigley

Northfield should be grateful for the area’s big-box stores, especially the Menard’s in Dundas 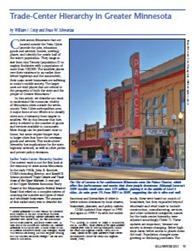 While the survey measures more than retail activity (it includes taxable sales reported by a dozen different industry classification codes), the presence of a single big-box retailer can significantly boost one city’s fortunes at the expense of another.

Schwartau illustrated how that’s happening in Fairmont, a city that doesn’t have a building materials retailer. His analysis suggests people are leaving Fairmont to buy building materials at the Home Depot in Mankato. Once they get there, it only stands to reason that they’re more likely shop for other things as well, such as clothes or groceries.

The anti-big-box crowd might say this illustrates exactly why small cities should be discouraged from recruiting chain retailers, but Schwartau suggests the opposite might be true. The best way for Fairmont to protect its local retail base might be to recruit its own big-box home improvement store.

Destiny is not preordained. Cities of similar size and location often experience different outcomes. Albert Lea in southern Minnesota appears to be outperforming nearby Austin. Owatonna has outperformed Faribault. Cities can change their own vitality by making conscious decisions and investments. For example, Owatonna was successful in attracting Cabela’s, Target, Lowe’s, Walmart, and an outlet shopping center, thus becoming a retail destination.

Are Northfielder’s grateful that there’s a Menards and a K-Mart just across the border in Dundas, as well as a Target nearby, just inside our city limits?

I am.  It saves having to make a lot of trips to the south Metro or to Faribault.

I wonder, though, if more couldn’t be done to attract those who travel to the area for our big-box stores to our downtown. Any ideas?