Proposed: City of Northfield Statement for Our Safe and Welcoming Community

Ross Currier has sent this to City of Northfield Mayor Mary Rossing and other members of the City Council. 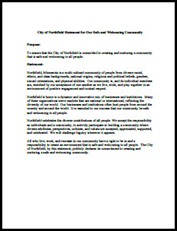 I am writing to you not as executive director of the NDDC but as a citizen of Northfield.  It is on a subject about which I have very strong beliefs.

Northfield’s economy is driven by knowledge workers, the "creative class", or economic innovators.  These individuals, businesses, and institutions "export" their information-based products and services around the country and the world.  Their clients and customers reflect the diversity our our country and our world.  In addition, our economic future is based on our community’s ability to continue to attract and retain these people and these organizations.  Northfield must be safe and welcoming to all people.

Working with a small group of Northfield citizens, I have drafted a statement (which I have attached) that I hope the Council will adopt for MLK Day 2012.  For many Americans, Dr. King has come to symbolize the on-going struggle for human rights.  I thought adopting the statement for his birthday was a way of honoring his work.

I have only managed to share this idea with a dozen or so people.  I plan to come to the January 3rd City Council meeting to ask for Council adoption of the statement.  I may be alone or I may be joined by others.