Understanding the new method of policing in Northfield

In today’s Northfield News: Burglaries in Northfield down by 40 percent in 2011 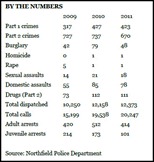 While calls for service are up through the end of last week, crime overall is down, most notably in the burglary category, which saw a 40 percent drop over 2010.

Deputy Police Chief Chuck Walerius believes that the reduction, along with a drop in reported crimes, is linked to a new method of policing the department instituted this year that takes into account the types of crimes being committed and the most likely trouble spots when allocating resources. Walerius said it’s not only helped to reduce crime, but help officers catch things as they unfold.

Here’s a map of property crimes in Northfield in the past 90 days, as generated by Northfield’s Police Incident Mapping Application. The pushpin icons represent burglaries, thefts, vehicle thefts, and damage to property. No robberies or arsons were reported. (The crime map only displays property crimes, whereas the table above shows all types of crimes. Also, see this site on the difference between theft and burglary.)

Where are the "most likely trouble spots" that would be new?

And what might Deputy Police Chief Chuck Walerius mean when he says that the new policing method "takes into account the types of crimes being committed"?

I may be able to get him to comment here but it might be helpful to first have some discussion. Maybe I’m the only one who’s puzzled.