Skip to content
Home > Education > Colleges > Geoff Swanson wants you to laugh: The Second City Improv All Stars are at the Lion’s Pause tonight
Published January 13, 2012 by Griff Wigley

Geoff Swanson wants you to laugh: The Second City Improv All Stars are at the Lion’s Pause tonight

I got this email yesterday from Geoff Swanson, Assistant Director at St. Olaf’s Office of Student Activities. He showed up for the photo this morning at my corner GBM office where he used to work when he was a student. 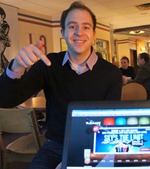 Hi Griff, I’m just sending a shameless plug for Second City’s performance here at St. Olaf tomorrow (Friday, the 13th) in the Lion’s Pause at St. Olaf. This is the show’s touring improv group and the event should be a riot.

Show starts at 8pm (doors at 7:45) and general admission to the public is $5 each. For more details people can contact myself or follow this link.