Skip to content
Home > Environment > Challenge for an Arts Town

Challenge for an Arts Town

Thank God, I’m not alone in the universe… There’s at least one other human being out there who thinks like I do. Witness the new design for a cell tower in Oceanside, CA. 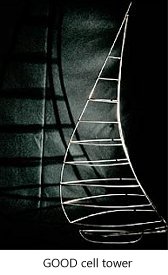 Now, if only we had some of our local artists working on new designs for the wind turbines…..