Skip to content
Home > LoGroNo > Membership posts > Meredith & The McKinstrys to team with Chris Koza for a Feb. 10 show at the NAG
Published February 2, 2012 by Griff Wigley

Meredith & The McKinstrys to team with Chris Koza for a Feb. 10 show at the NAG 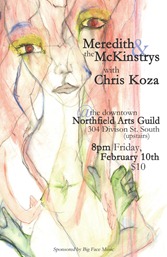