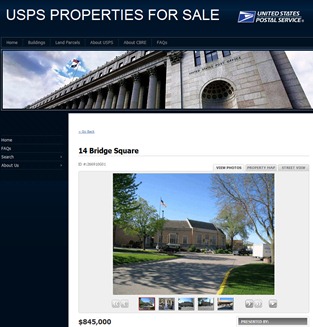 The government’s listing for the Northfield Post Office building reads:

14 Bridge Square, Northfield, Minnesota represents a unique opportunity to purchase a unique and beautiful former US Postal Service facility. The building is a 9,708 SF and is located on 0.53 acres. This architecturally distinct building was built in 1936 and sits prominently in the historic center of Northfield. The property includes 15 surface stalls in the off-street parking lot.

The realtor is Chris Gliedman, CBRE, based in Mpls.

The downtown post office could be turned into a Northfield Business Center, serving as an incubator and housing the Chamber, NDDC and NEC, along with small shops.

By tying Bridge Square with the service areas and alleys surrounding the post office building and the buildings facing Division Street, all properties on the block could be on the river.

Should the Downtown Streetscape Taskforce buy it, since a year ago, the City Council rejected its recommendation to purchase the rental property at 304 Washington St. for a parking lot at a cost of $760,000?