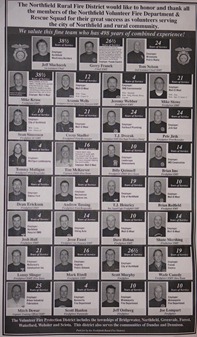 It should now be clear to the citizens of Northfield (see this blog post and discussion thread with 201 comments) that Northfield’s firefighters, part-time employees and members of the Northfield Fire Relief Association, aren’t really volunteers in the sense that most people use that term.

Yes, state statute 299N.03, subdivision 7 uses the term ‘volunteer’  to define those firefighters who are paid on an on-call basis as well as those who aren’t paid.  But that’s immaterial.

And if they stay on the job for 20 years, they get a lump sum pension payment of $150,000.  That’s tied for the best lump sum deal in the state of MN.  A few firefighters are nearing 40 years of service and they’ll get $300,000+ when they retire.  (Note: these pension funds are not funded solely by the City of Northfield/taxpayers. State aid/investment returns typically exceed the municipal contribution. See my blog post criticizing the Northfield News for their yet-to-be-corrected error on this.)

It’s true that those firefighters who are also members of the Rescue Squad (is that everyone?) are not paid for going on rescue calls (car accidents, medical problems, etc) nor for rescue-related training (2nd Monday of the month). But I think of these uncompensated hours, as well as the community activities by many firefighters (e.g., speaking to 3rd grade classrooms about fire prevention) as part of ‘the deal:’ stick with this part-time, hourly-pay job that requires a few extra hours per month on your own time and you get a nice nest egg (lump sum pension payment) after 20 years.  Plus, as I’ve written before, it’s an interesting and challenging job in which they get to make a real difference in people’s lives, contribute measurably in the community’s quality of life, and earn our respect for doing so.

Everyone I’ve talked to is surprised that there’s this level of financial compensation for firefighters they considered to be 100% volunteer.  But I’m quick to stress to them that I think this is a good deal for the Northfield community. We get a high quality firefighting force with little turnover for a fraction of the cost of full-time firefighters.

Fundraising by the Northfield Fire Relief Association and the Northfield Rural Fire Protection District (dinners, dances, pull tabs, bingo, duck race, etc.) is a problem. I’ve assumed (as have most of the citizens I’ve talked to) that fundraising money goes towards firefighting equipment or other firefighting-related expenses.  It turns out, that’s not the case.

See the Northfield Fire Relief Association check registers for 2010 and for 2011. See their 2010 tax statement.  While there doesn’t seem to be to be anything that would indicate a misappropriation of funds (how would I know!), it seems that, for the most part, the money raised benefits the firefighters, not firefighting.

For example, in attendance at the annual Firefighters’ banquet (not the benefit dance) at The Grand Event Center are the firefighters and their wives/girlfriends and some representatives of the Northfield Rural Fire Protection District. City leaders (mayor, police chief, city administrator) are typically invited. The steak/lobster dinner and open bar the entire night costs a few (several?) thousand dollars.

Fundraising of various kinds pays for this, of course, not tax dollars. I might be supportive of a lavish affair like this if the firefighters were 100% volunteers. But they’re not. They’re well-compensated. And for them to conduct fundraising activities that benefit themselves as if they were volunteers seems more than a little disingenuous to me.

The gambling (pull tabs) revenue is significant ($100,000+) but the cost of goods sold and various expenses were such that gambling generated no profit in 2010.  Is that typical? I don’t know but if it is, why do it?  The purpose of charitable gambling is to generate a profit for the charity’s mission.  Maybe I’m missing it but I don’t see evidence of mission-related expenses.

I think the Northfield Fire Relief Association should quit marketing itself as the Northfield Volunteer Fire Department.  And any public fundraising activities should be pitched as directly benefiting a specific cause, activity, or piece of equipment.  If they want to have an all-expenses paid annual banquet/bash, fine, but make sure donors know that that’s what their contributions are paying for.

An easy first step towards more transparency would be for both the Northfield Fire Relief Association and the Northfield Rural Fire Protection District to each have separate websites where Articles of Incorporation, by-laws, mission, and members are all posted and where financial statements, meeting minutes, etc. are regularly updated.  Nearly every Northfield area non-profit and membership association of any size has a website and most have blogs. Why not these two? They both play an important role in our community and public awareness/accountability is now needed.  They both have the financial resources to pay for it.