Trial approaching for man charged in death of Shea Stremcha; sign up now to attend and show support

Jeff and Leanne Stremcha would appreciate a show of community support at the upcoming jury trial. (For background, see this July 20, 2011 blog post, R.I.P.: Former Northfielder Shea Stremcha shot and killed in his Minneapolis home.)

A trial date has been set for Semaj Williams, one of two men charged with first degree murder in the death of Shea Stremcha.  Jury selection is expected to begin on Tuesday, May 15 with the trial itself likely beginning on Monday, May 21. Shea was killed during an invasion of his home located in an otherwise quiet residential neighborhood in south Minneapolis on July 20, 2011.  Williams has pleaded not guilty of the crime. 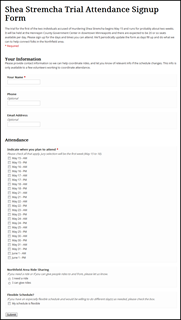 To that end, an online sign-up process has been established to help facilitate attendance to the proceeding and to try to prevent over/under attendance.  The courtroom will have a total of 42 ‘observer’ seats and roughly one-third will be reserved for immediate family members on each side of the case.  After that, seating is on a first come, first served basis. Anyone planning to attend, is asked to complete this online sign-up form.

All trial activities are held in room 1456, Tower C, of the Hennepin County Govt Center on S 6th Street between 3rd Ave S and S 4th Ave in downtown Minneapolis.  Hennepin County District Judge, The Honorable Marilyn Kaman, will hear the case which will be prosecuted by Assistant County Attorneys Therese Galatowitsch and Sarah Hilleren.  Williams is being defended by Katie Rindfleisch of the Kamrath Law Group.