As I mentioned last week, I first blogged about mountain biking at the River Bend Nature Center (RBNC) in Faribault back in January and shortly thereafter, learned about the problems with it.

So I was really pleased that RNBC staff hosted a meeting with about 25 local mountain bikers last night at the RBNC Interpretative Center.

After everyone introduced themselves, RBNC Executive Director Barbara Caldwell, RBNC Naturalist Educator Garrett Genereux, and Ben Witt, owner of Milltown Cycles in Faribault, each made brief presentations about the status of mountain biking trails in the park.

Barbara set a positive tone to the meeting right from the start, saying that they were genuinely eager to learn more about mountain biking, given the increase in riders that they’ve seen recently. She said that while they had no desire to become a mountain bike park ("We’re a nature center"), they are multi-use and see mountain biking as another way to engage the public in their mission.

Garrett showed a special map he’d created of all the trails in the park, both authorized and unauthorized. (I’ve obscured the map in the photo above.)

Ben Witt expressed his appreciation for the willingness of RNBC staff to even have the meeting, seeing it as a huge opportunity.  He explained how many sections of the authorized trails are not only bad for the park because of erosion, they’re also not the new style of mountain bike trails (eg, switchbacks for up-hills) that help to make the sport so enjoyable.

The rest of the meeting was open discussion. I urged RNBC to see mountain biking not as something to do to accommodate to a group of users but rather as a strategy to protect the park. By putting in new-style mountain bike ‘flow’ trails that are fun and challenging for a range of skill levels, they’ll create a powerful incentive for riders to only ride on those trails, thereby protecting the rest of the park.

John Ebling made the point that local ‘ownership’ of these trails by local mountain bikers who work to create and maintain them eventually can create a culture of responsible use by the wider mountain biking community.

The plan now is to create a local task force or working group to figure out next steps. Contact Barbara or Ben (see right sidebar of his Milltown Cycles blog) if you’d like to be involved. 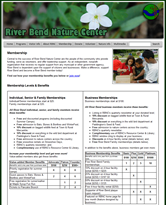 And above all, become a RNBC member.  Our voices as mountain bikers will be far more influential if we show we care enough about RBNC to support them financially.  Their online membership signup form makes it fast and easy.