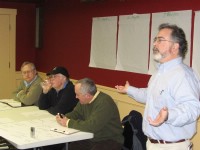 Anne Bretts, managing editor at N.org, has blogged about it: What would lure you downtown? (It’s an opinion piece, with an invitation to start a discussion.)

Ray Cox has blogged about it on his citizen blog: Business, taxes and ??? and his Northfield Construction blog: A strong downtown.

Ross Currier has blogged about it: Building and Business Owners Discuss Downtown Issues. Ross emailed me this additional reaction:

We were all surprised by how many people turned out. I guess that the Forum lived up to its premise, that beneath the bright surface of downtown, there are some serious structural challenges. The fact that over 50 people showed up on short notice, early in the morning, to talk about these issues makes me believe that folks really value downtown.

During the hours following the Forum I received a half dozen phone calls and e-mails from building and business owners that suggested that we have coffee. I think that such a large gathering may not be the best environment for sharing intimate economic details but it certainly seems to have touched on an important topic and triggered a reinvigorated discussion. Based on the calls and messages that I received, it appears that these folks are not only willing to talk but willing to commit to work to implement ideas to achieve tangible results in the next 12 months.

Here’s the audio from the first 43 minutes (not part of our LG podcast).