Two Opportunities to Comment on Streetscape Plans and Projects 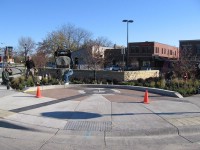 No one can deny Griff’s rapidly developing photographic skills. Just think, some day when his name is mentioned in the same breath as Brady, Capa and Lange, you’ll be able to say “I knew him when…”.

Many of Griff’s images are of the civic “art” known as Streetscape. His photos have included the Library Plaza, the Riverwalk Arches, and the Parking Lot Screening. All of these pieces are part of a larger scale and longer term effort to visually enhance our town’s infrastructure.

Tomorrow, Tuesday, November 6th, there are two opportunities to hear about future plans and projects and give the City of Northfield feedback. From 8:00 am to 9:15 am the NDDC’s Monthly Forum, in the Riverview Conference Room of the Archer House, will focus on this topic and then from 5:00 pm to 6:30 pm there will be a Neighborhood Meeting in the Council Chambers of City Hall on the same subject.

Hear the details about and talk to the people guiding this work. It’s a great opportunity to help shape your community.