How to make bicycling in downtown Northfield safer and more popular? Sharrows might work

While downtown is the heart of Northfield, riding bicycles there can be a challenge for many people who are not comfortable riding with traffic in the middle of the street, especially on Division St, the 4th St. bridge, and Water St. on the west side of the Cannon River.

The legal alternative – riding close to parallel or diagonally parked on the narrow streets—can be scary for many, as it’s difficult to anticipate when a door might be opened in your path or when a car that’s backing out of its parking spot might force you to swerve out into traffic.  The illegal alternative—riding on the sidewalks, is dangerous for pedestrians.

One possible solution is to paint sharrows on these streets and then conduct public awareness events and campaigns to get both drivers and bicyclists acclimated.

What is a sharrow?

[the symbol consists] of a bicycle symbol with two chevron markings above the bicycle [‘share’ plus ‘arrow’ = sharrow].

See the City of Minneapolis page on sharrows for an introduction, as well as the first 2 minutes of this video from their bicycles index page: 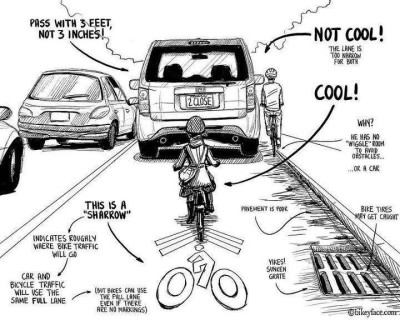