Skip to content
Home > Education > K-12 > Can Kids Walk to School in Northfield?

Can Kids Walk to School in Northfield? 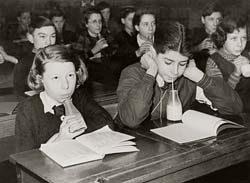 There’s a growing awareness nationwide that encouraging kids to walk and bike to school may pay off in several ways. Besides all the Norman Rockwellesque feelings the idea engenders, potential benefits include increased physical activity for youth and reduced traffic congestion.

Walking to school is one viable solution to the childhood obesity epidemic, but it takes a village to implement a successful walk to school program, says Amy Eyler, Ph.D., an instructor at Saint Louis University School of Public Health. “In order to have a successful program, there has to be support from everyone – not just the schools,” Eyler said. “It has to be a community effort with involvement from public safety offices, the community and city planners, too.”

Speaking of community effort, Minnesota’s own Congressman James Oberstar has been instrumental in implementing the national Safe Routes to School program.

At the local level, the Northfield school district provides bus transportation for school-age children who live more than one mile from their school. (It may be less for elementary-age children; I’m writing this from memory and am not verifying the information). How feasible is it to promote more walking and biking to school in Northfield, at least for middle- and high-school students? I understand that there are schedule requirements, e.g. extracurriculars both before and after school, that may influence the decisions made by many students and families, but even taking that into consideration, I think we as a community could do a lot more to encourage walking and biking to school.

(Heck, I’d appreciate anything that got more middle-schoolers to take the bus. The one time I had to drive my daughter to the middle school for regular school start time this year, there was an absolutely ridiculous bottleneck on 246/ South Division that made me wonder why it seemed that half the cars in Northfield were lining up to drop their kids at the middle school. They can’t ALL be as disorganized as I am, can they? But I digress.)

Obviously the location of the NMS and NHS campuses on the south side of town makes it impractical for many of the kids who live in the northwest part of town to walk or bike, but there’s a significant part of Northfield’s population that is within a mile or two of the schools. My middle daughter, who’s a senior at the high school this year, frequently walks home from school, and during the summer session often rode her bike. My youngest daughter hasn’t caught the vision yet, but I’m working on that.

What has been your (or your children’s) experience with walking or biking to school? Is this something we should encourage more of? What’s the best way to go about it? Does it require specific changes by the school district, the city, or any other entity?