A wrong-way bicyclist on Division St. nearly mows me down 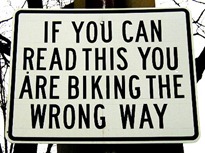 I exited the Goodbye Blue Monday yesterday morning  at about 7:30 and, as always, paused and looked both ways before crossing the sidewalk (yes, the sidewalk) to check for anyone biking, as I was almost hit a couple of years ago.  I then walked between two parallel parked cars, paused and looked left to see if any cars were coming, took one step onto Division St. and was hit by a bicyclist going the wrong way.

‘Hit’ is an exaggeration.  As the young woman skidded to a stop, her front wheel and handlebars just made light contact with my body.  I don’t remember if she apologized but I looked at her and said "Do you realize you’re riding on the wrong side of the street?"  She flatly said ‘yes,’ got back on her bike, and continued riding south on Division on the wrong side of the street.

Two GBM patrons on the sidewalk looked at me and said something to the effect of "Wow, that was a close!"  As I crossed the street towards my car, I noticed a Northfield Police car slowly coming south on Division. I motioned to the car and the officer pulled over and rolled down his window.  "Did you see what just happened?" I asked. He smiled and said "Yeah, I saw that."  I said "She needs to be disciplined!"  He didn’t reply and pulled away.

I wondered whether he was going to pursue her. I saw him make a right turn on 4th St.so  I got in my car, turned right on 4th, saw that Water St was blocked because of people setting up for Riverwalk Market Fair and assumed that he drove across the bridge. I did likewise and then saw him on Hwy 3, turning right on 2nd.  So I don’t know if he caught up to her to issue a warning but it was clear that he didn’t issue a citation.

Back in July, I published a blog post titled Ticketing law-breaking bicyclists: if Edina and NYC can do it, why can’t Northfield? in which I cited the problem of bicyclists riding on the wrong side of the street. I was glad to hear from Mark Taylor, Police Chief/Director of Public Safety who said that they would stepping up bicycle law enforcement. It’s perplexing to me why this cyclist was not issued a citation but I’ll see what I can find out.

Later in the day when I was telling Robbie about the incident, it occurred to me that I should have asked the bicyclist why she was deliberately riding on the wrong side of the street.  My guess is that she would have cited her fears of diagonally-parked cars on the west side of Division backing out into the street and running into her. And that’s something I wrote about back in early July, How to make bicycling in downtown Northfield safer and more popular? Sharrows might work.

More than 500 New York City residents are injured badly enough to be treated in hospitals after being struck by bicyclists each year, according to an analysis by Hunter College professors… Dr. Tuckel, a sociology professor, said these figures represent “the tip of the proverbial iceberg” because they only include pedestrians who wound up in the hospital. They do not include victims who visited their doctor’s office or a walk-in clinic for treatment.

For those of you snickering: 1) no, I’m not yet suffering from PTSD and expecting the City to provide me with CISD services; and 2) yes, it would have been more than a little ironic if she’d crashed hard into me and then cracked her skull on the pavement because she was not wearing a helmet.