Skip to content
Home > Environment > More on the Need for LID
Published January 17, 2007 by Ross Currier

More on the Need for LID 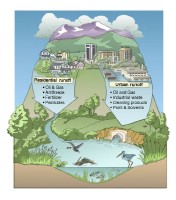 I’ve blogged on LID a couple of times, first the initial discussion at the Planning Commission and then in relation to Carleton’s green roof, in an effort to raise awareness of this new approach to protecting our streams and rivers. In Monday’s (January 15th) Strib (Twin Cities + region section) there was an article about the Minnehaha Creek Watershed District plan to implement LID in the western suburbs: “”Bold” plan to clean Minnehaha Creek has developers on edge”.

The plan is to require developers to achieve “zero discharge”, that is, no polluted water can run off from a developed site. The water must be cleaned before being allowed to flow into the environment.

The developers are worried about the cost of such requirements. In zero discharge, they would have to install rain gardens or grit chambers to capture and cleanse the water before it leaves the site. In a recent project proposed for Northfield, the cost to install an additional water-capturing feature (the fourth “corner” on the site) would have been three-tenths of 1% of the total development budget. On staff’s recommendation, the Council decided that the developer could drain the water from their parking lot into a nearby storage pond, the old paradigm approach.

That project is now in the past, it was approved and construction will begin this spring. However, there will be other projects coming before the Planning Commission in the next few months.

The Minnehaha Creek Watershed District is just a little ahead of the curve. The Northfield Planning Commission was led to believe by the people from the Non-point Education for Municipal Officials and city staff that the State of Minnesota will be adopting similar requirements, maybe as early as this year. Such a requirement might be created in Northfield in advance of State action, based on the current work on the Comprehensive Plan and Zoning Ordinances.

I guess the question is: what cost for environmental protection is reasonable to expect developers to bear?